From Sons of the Forest Wiki
Jump to: navigation, search

It is unknown how many enemies will return from The Forest, there are six known enemies at this stage.

Regular Cannibals are basic enemies. They move quickly, and from the 2nd trailer are shown to have the ability to steal resources from in-progress buildings. 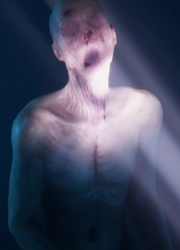 The Faceless Cannibal as seen in announcement trailer

Also known Faceless Cannibals (title place holder until more is known) can be seen in the announcement trailer for Sons of the Forest.

These cannibals can be seen in a cave and have no eyes. They are reminiscent of the baby mutants from The Forest - they may be adult forms of them but more information is needed. It is most likely that cave cannibals will be hyper sensitive to sound as a result of their lack of eye sight. It is most probable that cannibals above ground will retain their eyes and eyesight. Cannibals were the primary enemy that players encountered in The Forest and it is most likely that it will be the same for Sons of The Forest.

Larger and stronger cannibals that wear gold masks. They may be aggressive towards standard cannibals, based on trailer footage.

sAs Giant is the large creepy that appears in the middle of the 1st Sons of the Forest trailer. They are likely the creature that launched the cannibal at the helicopter in the start of the trailer. It is possible that armsy's are children in The Forest, which could indicate these giants are fully grown armsy's. 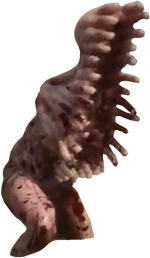 Fingers are shown near the end of the 2nd Sons of the Forest trailer. They move slowly and there may be a high punishment for getting caught in their jaw. They also may have the ability to influence Twins.

Twins are shown in the final scene of the 2nd Sons of the Forest trailer. Like the fingers, they move slowly, and their behavior may be influenced by the Fingers.